As the Life of a Flower

Laura Newell (1854-1916) knew whereof she spoke. She was orphaned as an infant and taken in by an aunt and uncle;(Cyberhymnal) she then lost her uncle and father figure when she was six years old, just two years after the family moved to the Kansas Territory. Her aunt, one of the first schoolteachers in Topeka, Kansas, held the family together through their personal loss and through the hardships of the Civil War era.(Connelley)

This is another of those songs that at first hearing might strike one as somewhat odd, even morbid; but if you think about it in the context of the times, it is not at all unusual. In the 19th century, most people died at home and were kept there until the funeral. Infant and child mortality rates were much higher, and deaths from disease and work-related accidents were more common. Especially on the frontier, death was a familiar part of life. The modern U.S. attitude of denying the reality of death--of keeping it at a safe distance, behind the walls of a hospital or funeral home--is a much more recent aberration. "It is appointed unto men once to die, but after this the judgment."(Hebrews 9:27) It may be considered socially objectionable to mention that fact, but it is no less true. We may as well face it and determine what we need to do to prepare for it.

Stanza 1:
As the life of a flower, as a breath or a sigh,
So the years that we live as a dream hasten by;
True, today we are here, but tomorrow may see
Just a grave in the vale, and a memory of me.

Refrain:
As the life of a flower,
As a breath or a sigh,
So the years glide away,
And alas, we must die.

Newell's poetry was most likely inspired by this passage from Psalm 90, attributed to Moses:

For all our days have passed away in Your wrath;
We finish our years like a sigh.
The days of our lives are seventy years;
And if by reason of strength they are eighty years,
Yet their boast is only labor and sorrow;
For it is soon cut off, and we fly away.(Psalm 90:5-6,9-10)

The brevity of life--especially in comparison to eternity--is unarguable. As a child, and then as a young man, I heard older people talk about how the years fly by. I am beginning to notice the acceleration. Months seem like weeks, years seem like months, and before you know it another decade passes into history. Consider also the inherent uncertainty of life; nearly every day, the news media will bring us a story of a life ended tragically early.

This focuses our attention on the last line of the first stanza--"a memory of me." Memories are all most of us will leave behind to our loved ones, and our interaction with people while we are here is our only legacy of eternal consequence. How will we be remembered? The second stanza addresses this question:

Stanza 2:
As the life of a flower, be our lives pure and sweet,
May we brighten the way for the friends that we greet;
And sweet incense arise from our hearts, as we live
Close to Him who doth teach us to love and forgive.
(Refrain)

In 2 Chronicles 21:20 we read the following chilling indictment of the life of Judah's King Jehoram: "He was thirty-two years old when he began to reign, and he reigned eight years in Jerusalem. And he departed with no one's regret." Let that sink in: the man died, and no one was sorry that he was gone. Now consider this statement about King David from Psalm 132:10, "For the sake of Your servant David, do not turn away the face of your anointed one."

Why would the later kings of Judah appeal to God on behalf of their ancestor David? Because David "served the purpose of God in his own generation."(Acts 13:36) His example of single-minded devotion to God and repentance from his sins became the yardstick by which later kings were evaluated. 2 Kings 22:2 is typical, where we are told King Josiah "walked in all the way of David his father."

Many of us have those Christian examples that we treasure in our hearts, of family members or friends who have now gone on to their reward. In times of trial or temptation, their memory often calls us back to duty and encourages us to continue in the way that they walked. But there are generations rising after us, right now, who need those examples as well--are we giving them that same blessing?

Stanza 3:
While we tarry below let us trust and adore
Him who leads us each day toward the radiant shore
Where the sun never sets, and the flowers never fade,
Where no sorrow or death may its borders invade.
(Refrain)

The Christian's great blessing, in considering the certainty of our mortality, is that we can be equally certain of our reward. Paul said, "I know whom I have believed, and am persuaded that He is able to keep what I have committed to Him until that day."(2 Timothy 1:12) Paul's confidence in his salvation was matched by his desire to see it finally consummated:

For to me to live is Christ, and to die is gain. If I am to live in the flesh, that means fruitful labor for me. Yet which I shall choose I cannot tell. I am hard pressed between the two. My desire is to depart and be with Christ, for that is far better. But to remain in the flesh is more necessary on your account. (Philippians 1:21-24)

Like Paul, therefore, we should be "making the best use of the time."(Ephesians 5:16) Let us do what good we can, like David "serving the purposes of God in our generation." And may we all have the confidence to say with Paul, "Henceforth there is laid up for me the crown of righteousness, which the Lord, the righteous Judge, will award to me on that day, and not only to me but also to all who have loved His appearing."(2 Timothy 4:8)

I have been unable to find any more information about G.H. Ramsey, and cannot find any other songs by him. The song is in the mainstream of the 19th-century gospel style. One prominent feature is the extent to which the alto harmonizes against the soprano in the intervals of thirds and sixths. (Harmony in thirds, or three notes apart, is seen when the alto is matching the soprano on the next line or space below the soprano notes, as in the opening phrase; harmony in sixths, six notes apart, begins the refrain.) This kind of harmonizing is very natural, and most altos will fall into it naturally if they are improvising harmony. As a result, the song works fairly well as a soprano-alto duet; for an interesting folk rendition of this song as a duet, visit the Wolf Folklore Collection, provided by Lyon College of Batesville, Arkansas.

Ramsey inserted a nice bit of harmonic variety in the refrain; the first measure of B-flat major is followed by a G minor chord (on "flower"), then by an E-flat major chord on "breath", and finally back to B-flat major on "sigh". The minor chord is rather unexpected in the gospel style; also, the succession of these harmonies outlines the subdominant chord of the key (E-flat, G, B-flat). This emphasis on the subdominant chord, and the downward cycle through its notes (B-flat, G, E-flat) creates a sense of relaxation or resignation that is particularly appropriate to the text. I don't know, of course, whether Ramsey was thinking of that deliberately or hit upon it by chance, but it works.

The Truth in Love 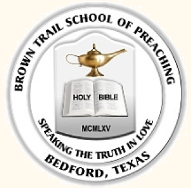 Please feel free to cite the original material on this blog in your own writing, or to use it in creating Bible classes, sermons, or bulletin articles, with two restrictions: give credit to the source, and do not publish it for profit. Thanks!

I'd be glad to hear from you! If you'd rather not sign up for the Blogger comments, I can be reached at haimericus@gmail.com.

I am not the missionary David W. Hamrick, currently serving with the World Bible Institute, but I commend his work!